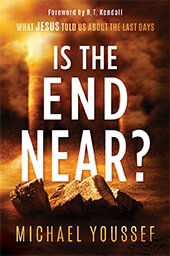 In Middle Eastern farming, there is a pathway between two fields. It is the boundary. It is the place where hard-packed earth is found. It is the strip in the field where the soil is not prepared for receiving the seed.

The parable of the sower in Matthew 13 tells us that Jesus is the sower and your heart is the soil. Satan seeks to ruin the soil on which the seed of the Word is planted. If he can, he will harden the soil of your life. Many times he does this by getting you to substitute human wisdom for God's Word. Then he succeeds in snatching away the good seed of the Gospel before it can seep into the soil and bring life.

For each idol you are willing to destroy, you will gain far more than you lose.

To keep the Word of God from taking root in your life, Satan will use any means to pull you away from growing your relationship with God. Unconfessed sin, unforgiveness, and bitterness are tactics he employs to harden your heart toward God. When you cling tightly to bitterness, anger, resentment, and unforgiveness, elevating them above your relationship with God, they become "idols," displacing the supremacy of God in your life.

When Mahmud of Ghazni invaded India, his conquering forces entered a celebrated Hindu temple to destroy its idols. The temple priests entreated Mahmud to spare a certain idol, but he refused. Instead, he struck such a blow to the image that it burst open and precious stones cascaded from the hollow interior.

Likewise, for each idol you are willing to destroy, you will gain far more than you lose. Each time you surrender something to God, you will remove another hindrance to a productive life of faith and prayer. Every idol that is demolished will bring you new treasures of grace and peace.

Prayer: Lord, my desire is to destroy every idol in my life. Please show me anything I am not surrendering to You and grant me the ability to surrender it to You today. I pray in the name of Jesus. Amen.

"Some people are like seed along the path, where the word is sown. As soon as they hear it, Satan comes and takes away the word that was sown in them" (Mark 4:15).